“Vysotsky in English” at the ASEEES Convention 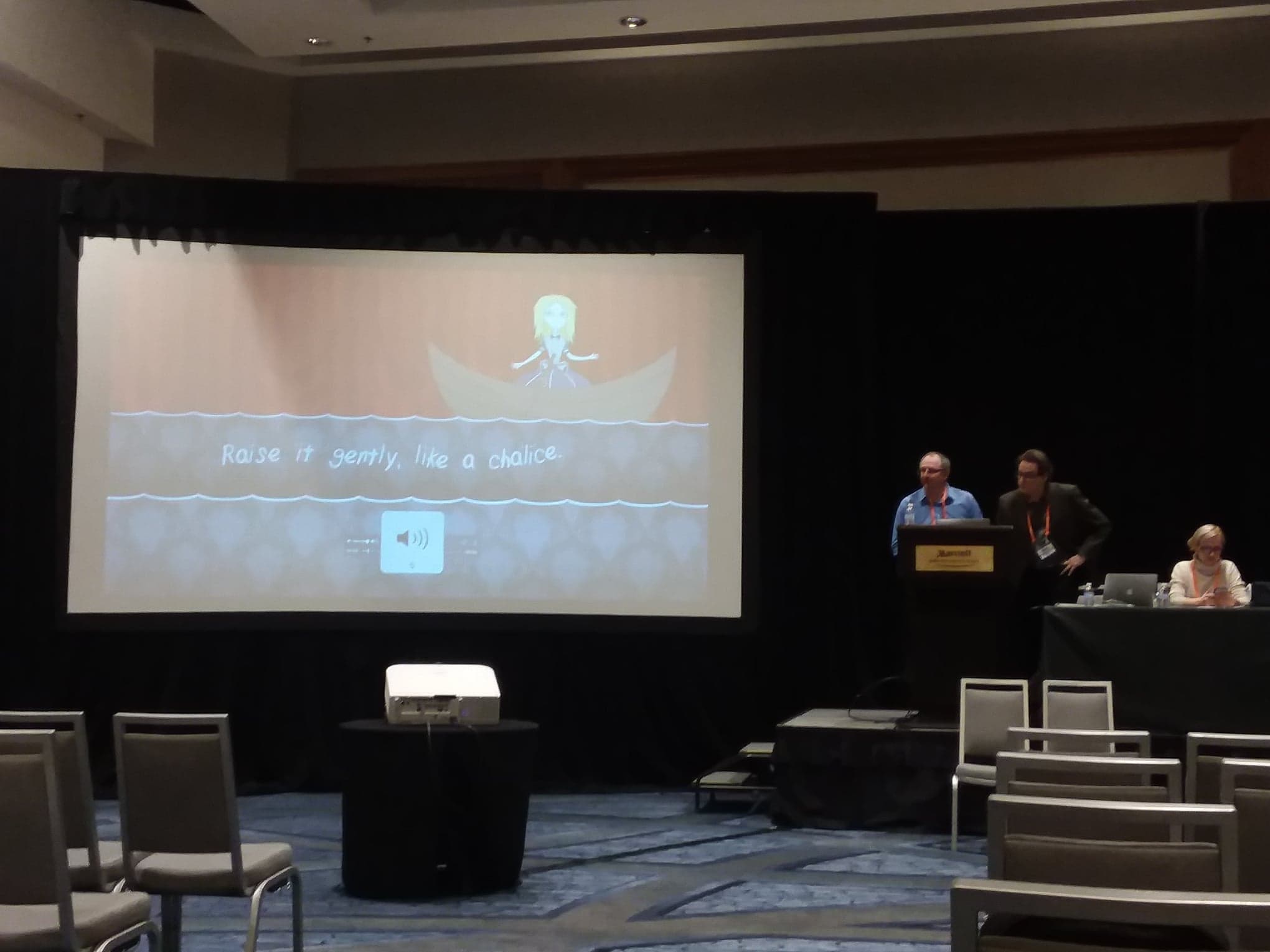 Presentation at the Academy of the Slavic, East European, and Eurasian Studies (ASEEES) Annual Convention.

VYSOTSKY IN ENGLISH: A Project of Translation and Performance

Good afternoon, ladies and gentlemen.  My name is Vadim, I am the head of the project “Vysotsky in English.”

Vladimir Vysotsky is a towering figure in Russian culture.  He is the most popular Russian poet of the 20th Century, arguably eclipsing such giants as Mayakovsky, Yesenin, Blok, and Tsvetaeva.  He was the greatest Russian singer-songwriter.  He was Russia’s original larger-than-life rock star.  He was a moral compass for the Russian people.  Finally, he was the loudest voice not just of his generation, but of freedom – in a very un-free society.  Decades after his death, he remains a cultural icon of enormous importance.  Unfortunately, due to the language barrier, he remains virtually unknown outside of Russia, Russian-speaking communities, and the field of Russian Studies.  My “Vysotsky in English” project strives to bridge this gap and bring Vysotsky’s works to English speakers in a way they were originally created:  as songs, translated, performed, and recorded.

I firmly believe that Vysotsky belongs in the same Pantheon of World Culture as Homer, Shakespeare, and Goethe, and only the lack of adequate translations prevents him from being properly inducted.  His songs are still relevant to modern listener.  They talk about such universal concepts as friendship, courage, love, and, above all, freedom.  Vysotsky’s characters often face a difficult choice (hence his role of a “moral compass” in the Soviet society).  They often fight for the right to do things their own way, in defiance of authority (hence his role as a “voice of freedom”).  An athlete defies his coach.  A racehorse defies the jockey.  A warplane defies the pilot.  A microphone defies the singer.  A scapegoat defies the entire animal kingdom.  And, of course, the most famous one of all:  a wolf defies the hunter.  These ideas can, theoretically, relate to Americans, at least those Americans who actually follow the lyrics.  American music has a long and proud tradition of storytelling, even if lately it’s been obfuscated by pure entertainment.  So those familiar with Pete Seeger, Johnny Cash, Tom Waits, and so on, can be interested in Vladimir Vysotsky.

Let me say a couple of words about how the project began.  I grew up with Vysotsky’s songs in my home in Leningrad, and I learned to play a few of them when I first picked up a guitar, just like thousands of kids across the Soviet Union.  After my immigration to the United States, I started studying English and, for some reason, began to wonder how the songs of my favorite Russian singer would sound in English.  Plus I was used to playing guitar and singing to my Russian friends and wanted to do the same for my new American friends, but had nothing to sing to them, so I started translating Vysotsky.  My first translations were, of course, terrible, but upon improvement of my own English skills, I kept coming back to these translations and polishing them.  Fifteen years later I finally deemed them good enough to be recorded.  So I went into studio.  Soon enough I realized that if I were to record these songs the way I played them live to my friends, they would not be very interesting to a modern American listener.  So I started experimenting with different sounds and different instruments.  I ended up recording four full length albums of fairly high production quality, featuring over 30 musicians of different backgrounds and instruments.

To date, my catalog of translations consists of about sixty numbers.  How do I approach the selection?  To be honest, it is almost always a simple matter of me loving these particular tunes and performing them in Russian.  I do, however, concentrate on songs that carry the universal concepts that I have previously mentioned.  These are the songs that need translating.  These values do not age and are relevant to people regardless of language and culture.  My personal motto is:  “When I translate, I must relate.”

For the most part, I select songs that do not require complex explanations.  Many of Vysotsky’s songs are firmly planted in the Soviet society of the 1960s and 70s, and translating them would require pages of footnotes, which would, in my opinion, hinder their enjoyment.  Songs must be songs, not lectures on foreign cultures.  Therefore songs like «Диалог у Телевизора» or «Поездка в Город» are absolutely untranslatable, short of literal translation, which I generally avoid.  On occasion, I do translate songs that venture outside typical American experience, in songs like «Ошибка Вышла» (“A Grand Mistake”) that alludes to Soviet “enhanced interrogations,” or «Разбойничья» (“Heavenbound”) that talks about medieval poverty and prisons, or «Цыганская» (“Gypsy Blues”) with its general sense of misery and the famous ultra-Russian «Эх, раз, еще раз, все не так, ребята!»

Mostly I seek analogs in English culture, something I could anchor the content to.  In my translation of “Heavenbound,” for example, I was inspired by “The Ballad of Reading Gaol” by Oscar Wilde.  Songs like «Горизонт» (“Race to the Horizon”) or «Так Дымно» (“So Hazy”) were much more straightforward.  Plus, I often rely on the established linguistic idioms like “dogfight,” “munchies,” “unstoppable force,” “final destination,” “first ascent,” “succumb to their demands” and others to ease the process of cultural integration of these songs and make them sound more natural and acceptable to American ear.

A separate challenge in Vysotsky’s songs is his trademark humor.  Not only humor is hard to translate, in and of itself, but it also ages rapidly.  Even contemporary Russians do not always find funny what was funny 40 years ago.  My belief is that if a song contains a joke, its translation must also contain a joke.  Sometimes literal translation of a joke works, sometimes it doesn’t.  A couple of times I took huge liberties with the original lyrics and updated them in order to retain the fun factor.  For example, I took Vysotsky’s humorous songs like «Слесарь Шестого Разряда» and «Несостоявшийся Роман» and completely changed their setting, transplanting the plot and the characters from 1960s Moscow to contemporary New York, so the songs became “21st Century City Blues” and “One Failed Romance.”  When it comes to Vysotsky’s serious works I am much more conservative and reverent.

One time I translated a song entirely out of spite.  I am not the only Vysotsky translator out there.  Many people love his works and translate him into every language imaginable.  I can only appreciate the English translations and some of them are demonstratively hideous.  Once I saw that a person who considers himself an authority in translating Vysotsky had translated the song «Еще не Вечер» as “This isn’t evening,” I dropped everything and went to work.  In about three weeks the first draft of “The Game Is Not Over” was done.

Finally, one song that I had never seriously considered translating is the one that is translated the most:  the famous «Кони Привередливые».  I was not happy with any of the twelve English translations that I came across, so eventually, I started working on it.  My rationale was that it simply would not feel right to have a comprehensive project on Vysotsky without this seminal number.  I was also not happy with any of the adjectives the translators picked for the title:  wayward, spirited, unruly, capricious, cantankerous, persnickety, etc.  I admit that I received help from other translators.  In particular, Tim Sergay of the University of Albany is responsible for the title “The Ornery Horses.”

Now.  This panel is not just about “translation,” but “translation and performance.”  Had Shakespeare’s plays only existed as texts and not been routinely staged and produced, they would, most likely, not have nearly the same popularity.  Similarly, Vysotsky’s songs must not be simply translated, but performed.  A play must be staged in theater, and a song must be sung.  Singing these translated songs adds a whole other level of difficulty to the usual pains of poetic translation.  Texts must not simply look good on paper or, more commonly, on an internet webpage.  They must sound good when sung.  Singability is a crucial parameter in the “Vysotsky in English” project.  For example, Vysotsky’s masterpiece, «Охота на Волков» (“Wolfhunt”), is known not just for its brilliant content, but for its unstoppable flow, its streaming, surging rush of power.  My first several drafts of this translation had it all:  the story, the rhymes, and the imagery, but they all sounded cumbersome.  I spent eight years on it until I was happy with the achieved singability and flow.  It then became the title track of my third album.

Performance skills are also very important, because Vysotsky himself set the plank incredibly high.  Unlike many Vysotsky’s fans, I do not believe his songs should be cast in stone, never to be touched.  They must be performed, must be sung by others, otherwise they fade from popular culture into history of popular culture.  But they must also be sung with the passion, the conviction, and the theatrics that Vysotsky himself excelled at.  His own levels of passion and power, of course, are almost impossible to match, but over the years many Russian performers have done an excellent job.  His performers in other languages should strive for the same result, otherwise the effect of Vysotsky’s works is diminished.

As Dr. Dzyadevych mentioned, I regularly perform them and would love to travel to your school to tell new audiences about Vysotsky’s legacy.  Tonight, I will be performing at the Ballroom H at 8pm.  Now, to illustrate what I was talking about, I would like to play for you a video for a song from my latest release, called «Песня об Обиженном Времени» (“Gears of Time”).